GH: We’re so curious to find out: who are you, where are you from, and what do you do?

Leo: My name is Leonardo Solaas, and I’m an artist, writer, teacher and software developer from Buenos Aires, Argentina. I studied Philosophy at the Universidad de Buenos Aires, but I’m self-thought in all matters related to art and technology. I started fiddling with code in the early 2000s, and I was quickly hooked with its possibilities as an artistic medium. At the moment there were very interesting works and experiments on the web made with Flash / ActionScript, from pioneers like Jared Tarbell, Eric Natzke, Joshua Davis and others. So that’s where I began. Shortly after I added Processing to my toolset. Eventually, I became a web developer working with the typical stack of front-end and back-end technologies. These days, I do most of my creative work on JavaScript and various frameworks and libraries within its ecosystem. I also use shaders in GLSL for intensive image processing on the GPU.

"Working with generative systems is like creating games for the computer to play. You can’t usually predict how is it going to play out, and sometimes you are thoroughly surprised."

Apart from my activity as an artist, I’m also devoting more and more time to my old love, philosophy, and thinking, writing and teaching about what it means to be human (and make art) in the age of the machines.

GH: What is the underlying philosophy behind your work?

Leo: Ever since I can remember, I have been fascinated by games: small worlds that magically emerge from a set of rules. Working with generative systems is like creating games for the computer to play. You can’t usually predict how is it going to play out, and sometimes you are thoroughly surprised. In any case, you usually go back to the set of rules, a.k.a. “algorithm”, and tweak it a little bit, always in the search for the most “interesting” results (whatever that means). It is a back-and-forth process that feels like a sort of dialogue between two vastly different entities: a person (me) and a computer. But I wouldn’t say the computer is just a tool to execute some ideas that were already there on my head. Far from it: I start moving in a certain direction, but I never know where am I going to end up. There’s an unpredictable, iterative process of exploration and experimentation, and we both contribute to it on equal parts. I like to think of it as a creative collaboration between a human and a non-human agent.

We call this “art”, but it is certainly very different from the traditional idea of art (which is still current for many people) as an expression of some interior state of the artist: inspiration or feeling or concept. There’s a distance that opens up between the work and me. I don’t make art, I make automata that make art. Also, the works are not this special, valuable thing in the world that blends talent and inspiration in a unique way, but something that can generally be produced quickly and in great quantities. Generative works are not important in themselves. They only become meaningful as a testimony or perceptible evidence of the abstract system they come from. That’s why I usually work in series: it is about making visible the space of possibilities enabled by the game from many different perspectives.

There’s a short article I wrote about this strange kind of language that is programming, as a way of communication between two entities that belong in almost completely disjointed worlds, and the curious affective relationship that it creates between them. (I also have a couple of writings about generative systems, but that’s Spanish only for the moment. Sorry!)

GH: Can you pick an artwork, dissect it for us and describe your workflow?

Leo: Sure! I will pick one from “La voz de la máquina” [The Machine’s Voice], a solo show at Galería Espacio Pla in Buenos Aires, which took place in 2018. That show consisted of three artworks unified by the common theme of the hand-made materialization of digital generative designs. I was playing with a sort of inversion of common ideas about the relationship between humans and computers (where the human supposedly “decides”, and the computer is a passive tool). Instead, I was putting myself in the situation of an output device, following as well as I could the instructions provided by the computer.

So, one of those works is “Articulaciones” [Articulations], a series of six white, geometrical 3d objects. Each of them is built from 252 identical foam board pieces (except for some special forms where pieces on the same layer overlap). They are set in place and pasted together by hand, one by one.

The design was previously chosen from the output of a generative system developed in Processing. The software sets in movement a sort of abstract creature made of many articulated arms that constantly move at random, while keeping some correlations between arms that are close together. So, the first part of the process was letting the system run and freezing it when “interesting” configurations emerged. At that point, I captured the information needed to reproduce that particular design. 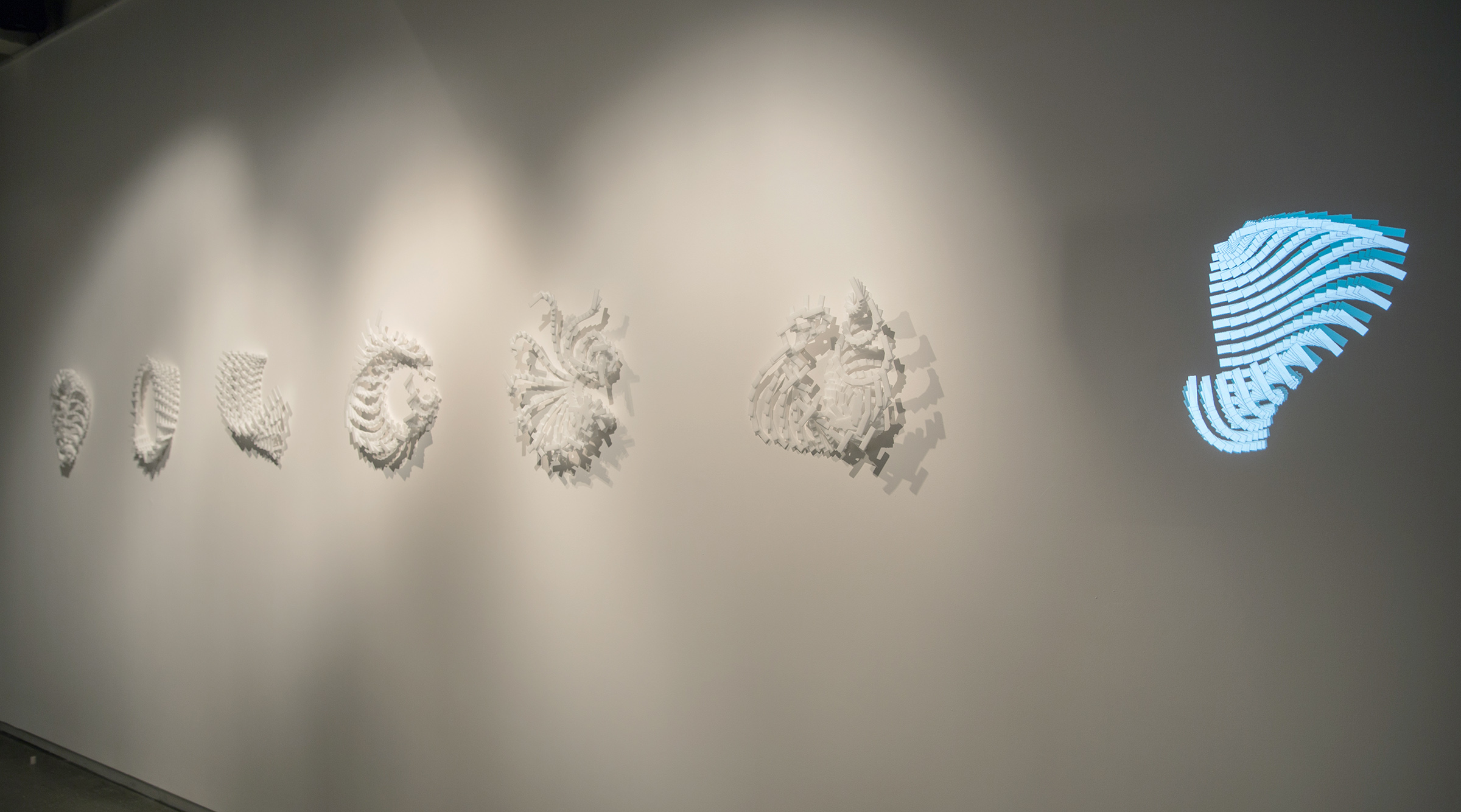 On a second stage, I chose six of the many designs I had saved as blueprints for the construction process. I built them using a printed 1:1 map and another Processing tool that made it possible to break up the design to show the layers one by one. So, I could set each piece with fairly good accuracy by looking at the printout below the object, and the details of the piece position relative to others on the screen. The result was not as perfect as a 3d printer or other automated systems, of course, but that was kind of the point. The whole show was about re-introducing the materiality of the hand-made and the imperfection of human action that is usually absent from so-called “computer art”.

Each of the objects is about 40-50 cm. tall, and building it took somewhere between 6 and 8 hours.

GH: What’s been inspiring you lately?

“Inspiration” is a very broad term! The ingredients for the soup that is always bubbling in my head include science and philosophy readings, conversations with friends and colleagues, the intricacies of algorithms and coding, different kinds of art, and a fascination with the clever ways nature has for creating order.

There’s a lot of art I find very inspiring that is not made by computers, like the spiderweb works by Tomás Saraceno, the wonderful aggregations of everyday items by Tara Donovan, the many experiments with the idea of “painting” by Tauba Auerbach, and many more.

GH: Tell us about your setup. Where do you create? What tools do you use?

Leo: Most of my work is purely digital / virtual / web based, so in general it is just me and my laptop together at my small home office, with a view to our small garden.

From time to time I break this routine with some crazy projects, like the one I explained above, which require a lot of experimentation and complex technical setups. At such times I invade the rest of the house with all kinds of stuff, putting to test the love and tolerance of Gaby, my wife. Lucky for me, she is very lovely and tolerant.

Sometimes the mess happens somewhere else. A couple of recent cases were artist residencies at CasaPlan in Valparaíso, Chile (where I worked with traditional printmaking techniques) and Medialab Prado in Madrid, Spain (where I developed a site-specific installation for their digital façade).